An article by firm partner Laura Manning-Hudson is featured as the “Board of Contributors” expert guest commentary column in today’s edition of the Daily Business Review, South Florida’s exclusive business daily and official court newspaper.  The article, which is titled “Signs, Signs Everywhere: It’s Time for Community Associations to Address Sign Policies,” discusses recent news reports from around the country that are indicative of an uptick in disputes within HOA communities involving homeowners’ yard signs.  Laura writes that today’s polarized political environment and social movements combined with widespread societal cabin fever caused by the pandemic have seemingly created a perfect storm for tempers to ignite over political and solidarity signs, and she offers helpful suggestions for how HOAs should respond.  Her article reads:

. . . In Macomb Township, Michigan, a couple has been quoted in a local TV report alleging they were singled out by their HOA to remove their Black Lives Matter signs while the association seemingly permitted their neighbors to post other similar signs supporting politicians and local schools. 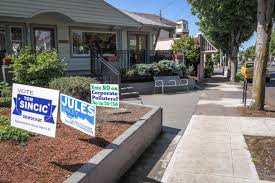 Reports involving HOA disputes over BLM signs also made local TV and newspaper headlines in late July in the San Francisco bay area and New Albany, Ohio, where an HOA issued an apology to its residents after it posted a deadline for the specific removal of BLM yard signs on its social media pages.

In Bend, Oregon, residents recently told a local TV station they were concerned about a demand from their HOA that solidarity signs for social causes must come down until election time. The letter advised residents that these signs would be viewed as political signs, which may only be displayed on an owner’s lot for 45 days prior to an official election and must be removed within three days after the election.

A spate of local TV news reports in Denver in early September chronicled the brewing controversy over an HOA’s demand for residents to remove their signs, culminating with a decision by its board of directors to reverse a long-standing policy and allow residents to display two signs. The association president said it had sent approximately 150 violation notices during the prior 90 days for everything from solidarity signs for social causes to those congratulating graduates and supporting first responders.

For most private communities controlled by associations in Florida, practically all temporary signs including political and solidarity signs, house for sale/rent signs, contractor signs while work is in progress, and congratulatory and seasonal signs may be prohibited by their HOA’s governing documents. Most community associations already have some form of sign policy in their rules and restrictions, and complete or partial bans without specific prior approvals by boards of directors are not uncommon.

Associations typically cite the promotion of community harmony and maintenance of its aesthetic appeal as the reasons behind strict bans on signs. While some communities make exceptions around election time for political signs, others prefer the uniformity and avoidance of potential confrontations stemming from stringent bans on most signs.

Either path has its pros and cons, and the best approach will vary by community.

Given the intense emotions and deeply held beliefs that characterize the current political and social climate, boards of directors should expect impassioned discussions on the issue at their meetings. Boards should also be cognizant of the fact that heated disputes over sign restrictions and takedown orders can draw negative media attention to a community.

These factors should not deter HOAs from taking a closer look at their sign policies if the directors believe it is called for in their community. Boards should work closely with highly qualified and experienced association legal counsel to develop and implement a policy that makes the most sense for their community. For communities desiring to allow signs, they should also consider restrictions on sign size, type and number, the length of time and timeframe during which they may be displayed, and their placement near the front of the homes. Thought should also be given to the enforcement measures for such regulations, including the implementation of compliance monitoring and violation hearings with uniform penalties. . .

Laura concludes by noting that most HOA communities in Florida and across the country are very likely to encounter concerns over their sign policies. The unavoidable nature of these travails dictates that HOAs should not shy away from them.  Instead, she suggests they take a proactive approach by hearing their residents’ thoughts and working with highly experienced professionals to deploy the best possible protocols for their community.

Our firm salutes Laura for sharing her insights into yard sign issues and policies for HOA communities with the readers of the Daily Business Review.  Click here to read the complete article in the newspaper’s website (registration required).