The firm’s Michael Toback authored an article that was featured as the “Board of Contributors” guest commentary column in today’s edition of the Daily Business Review, South Florida’s exclusive business daily and official court newspaper.  The article, which is titled “Case to Watch: HUD Complaint Against Condo Association Ban on Religious Meetings,” focuses on a recent complaint to the Department of Housing and Urban Development regarding alleged Fair Housing Act violations by a Florida condominium association that banned religious meetings from its community room.  Michael’s article reads:

Bans of any kind against the use of the community room, such as those for specific gatherings, should be considered only after prudent consultation with experienced legal counsel. Furthermore, a ban against religious gatherings can prove particularly troublesome due to the potential for violations of the federal Fair Housing Act.

Such cautious considerations may have been overlooked in the decision by a board of directors of a Port Charlotte condo association to prohibit prayers and religious meetings in their community’s common room. The ban by the association for the Cambridge House of Port Charlotte led to the filing of a complaint with the U.S. Department of Housing and Urban Development alleging violations of the federal Fair Housing Act as well as Florida condominium laws.

The complaint was filed on March 6 on behalf of Cambridge House resident Donna Dunbar, who is a lay minister in the Seventh Day Adventist Church and the leader of a women’s Bible study group that formerly met in the Cambridge House common room for two hours on Monday mornings. It alleges that on Feb. 6 the Cambridge House’s board of directors adopted a resolution to prohibit prayers, religious services and religious meetings in the common areas.

The allegations also state that Dunbar and her Bible study group faced discrimination before the Cambridge House prohibited their meetings, claiming that the board of directors had previously required her to purchase insurance in order to hold the gatherings. Dunbar claims this requirement was despite the Cambridge House not mandating that other groups holding movie and game nights obtain similar coverage. 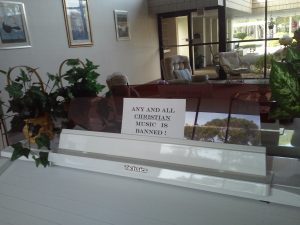 After the ban was imposed, Dunbar alleges that religious displays at Cambridge House were removed, including the removal by property management staff of a St. Francis of Assisi fountain and statue. Dunbar further claims that a sign was posted on an organ in the lobby declaring: “ANY AND ALL CHRISTIAN MUSIC IS BANNED!”

In addition to the discrimination claims, the complaint also alleges violations of state condominium laws based upon the board of directors’ failure to include the voted-upon resolution on the religious ban in the agenda for the board meeting. Dunbar’s complaint, filed by her legal counsel with Greenberg Traurig, asserts that the association’s edict “manifests profound hostility to Christians and indeed all religious residents, and discriminates against any resident who wishes to express their faith beyond the walls of their private residence.”

While there have been several Florida appellate court decisions over similar association rules, this federal Fair Housing Act complaint will be very closely watched by the state’s community associations and the professionals serving them. If HUD finds in favor of Dunbar and takes severe measures against the Cambridge House, associations will need to take careful note of the reasoning behind HUD’s decision.

The onus is now on the federal agency to conduct a thorough examination of the allegations in order to reach a conclusion based upon all of the available information and prior legal precedent. In addition to deciding this particular claim, HUD’s decision should clearly spell out what constitutes federal Fair Housing Act discrimination violations involving religious gatherings and displays in communities with associations.

Our firm salutes Michael for sharing his thoughts on this FHA complaint and its takeaways for community associations with the readers of the Daily Business Review.  Click here to read the complete article in the newspaper’s website (registration required).