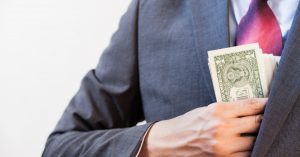 “Donovan Staley abused the trust of the condo directors and owners to line his own pockets,” said State Attorney Katherine Fernandez Rundle at a news conference at the time.  “We want the community to know that the new law is going to make a difference.”

The Herald article indicates that authorities believe Staley asked an electrical firm working in the building to add $6,000 to the invoice and remit it to him in exchange for the community’s future business.  There is also video of Staley allegedly taking money out of the community’s laundry machines, from which authorities say he stole more than $3,000.  (Click here to read the article and watch the video of the state attorney’s press conference in the newspaper’s website).

A case involving the theft of valuables from a Singer Island condominium by one of the property’s maintenance employees was recently covered by the Fox television network affiliate for the Palm Beaches and Treasure Coast.  Police tracked the unit owner’s gold bracelet engraved with his name and discovered that it had been pawned by Steven Kos, who was a maintenance worker with access to the keys for the units at the East Pointe Condominiums where the theft occurred.  In addition to the bracelet, police also say that Kos pawned additional jewelry and other items from the theft at local pawn shops, and he has been charged with burglary, grand theft and six counts of dealing in stolen property.  (Click here to read the report in the station’s website).

These recent cases should serve as a reminder to Florida community associations of the level of safeguards and vigilance that must be put in place in order to help to prevent theft, fraud and abuse by association and management employees.  In addition to the implementation of security and administrative protocols that help associations to avoid becoming a victim, the criminal penalties prescribed by the state’s new condo fraud law have now made associations better equipped to engage law enforcement than ever before.