Our firm’s other community association attorneys and I have all seen our fair share of disputes arising from unapproved property improvements in South Florida HOA communities over the years. However, the saga involving a diamond design in a homeowner’s driveway at the Equus community just west of Boynton Beach appears to be exceptionally combative, so much so that it drew the attention of the Palm Beach Post.

According to a recent article from the newspaper, the HOA has been trying to have homeowner Barry Rosenthal remove the decorative red diamond design (see photo below) for more than three years. Both parties appear to be very deeply entrenched in their positions. 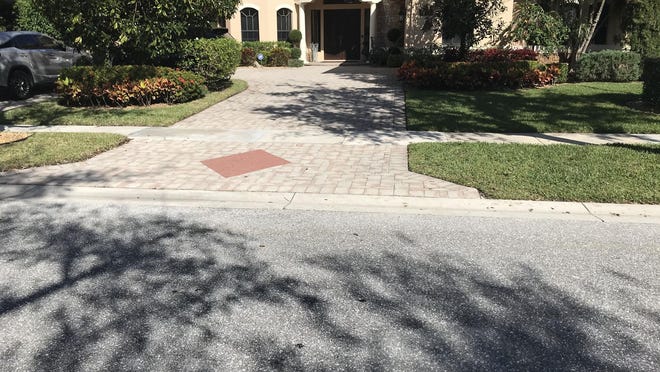 Rosenthal had it installed as part of his new driveway project in 2017 without obtaining the HOA’s prior approval, and he was subsequently fined $1,000 and lost his usage rights to the community’s amenities, which include tennis courts and a fitness center.

In the article, Rosenthal states that his case is “all about selective enforcement.” He claims another resident has almost their entire driveway paved over with larger diamonds, and the HOA has done nothing to them.

“There are a lot of cliques here and if you are in the right clique, you get a free pass,” he is quoted in the article. “An arbitrator told us at mediation that he never saw such selective enforcement. This is wrong. We have not yet had a trial. I can’t wait to get to court.”

The HOA’s attorney states that Rosenthal knew what the rules and regulations were, and he needed to get association’s prior approval for the design. He chose not to, and now he has refused to remove the offending diamond shape.

The article also correctly notes that the party which ultimately prevails at trial will most likely recover their legal fees, which could run into the tens of thousands of dollars for a case that has already taken more than three years of litigation and mediation.

Cases such as these in which a rather simple dispute snowballs into an epic fracas between a homeowner and their community association over an unapproved property improvement are typically unfortunate for all the parties involved. Associations should always turn to a set procedure to find effective, reasonable and equitable resolutions for all such disputes. These protocols will typically include board and/or committee hearings in which experts from both sides discuss and answer questions regarding all the pertinent building code and aesthetics issues. After all these considerations are weighed carefully by an impartial panel, its final decision should be based on reason and aimed at finding a fair resolution that meets the community’s standards for the uniform and unbiased application and enforcement of its rules and restrictions.

Employing such dispute resolution procedures will not prevent all such skirmishes from ending up in court. However, for those cases in which litigation proves to be unavoidable, associations are bound to fare much better in the proceedings by being able to demonstrate that they conducted the entire process as reasonably and fairly as possible in a good-faith effort to find an acceptable resolution.