The firm’s latest Miami Herald “Real Estate Counselor” column by Gary M. Mars appears in today’s print edition of the newspaper and is titled “Community Associations Should Break Ties with Developer, Board Members During Turnover.”  The article focuses on the turnover process by which control of a community’s operations and management is transferred from its developer to the home/condo buyers.  Gary notes that this is one of the most critical junctures for the future administrative and financial wellbeing of all condominium and HOA communities, and those owners who have made the investment to be the charter members of their new association should always begin their takeover with the same vital step: breaking ties with the developers’ board members and experts.  His article reads:

. . . Turnover is when a new community’s unit owners get their opportunity to hire independent legal counsel, financial professionals, and engineers to conduct meticulous audits and inspections. A very careful review of all a community’s rules and business records, as well as the physical state of the entire property, is very much the order the day. The end goal is to hold the developer, as well as its contractor, suppliers and design professionals, accountable for any budget shortfalls and construction deficiencies. 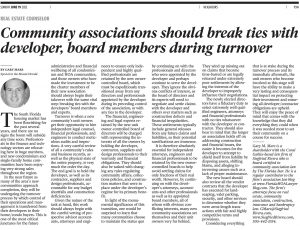 Given the nature of the task at hand, this work should always begin with the careful vetting of prospective advisor accountants, attorneys and engineers to ensure only independent and highly qualified professionals are retained by the new owner-controlled board, which must be expeditiously transitioned away from any directors and professionals appointed by the developer during its preceding control of the association, or with any ties to the developer.

The financial, engineering and legal experts retained by the new unit owner-controlled board of directors will be charged with representing the interests of all the owners by holding the developer, contractor, suppliers and design professionals to their warranty and financial obligations. They should also be tasked with changing any rules regulating community affairs, collections policies, and construction matters that were in place under the developer’s regime for its primary benefit.

In light of the monumental significance of this transition, one would be surprised to learn that many communities choose to maintain the status quo by continuing on with the professionals and directors who were appointed by the developer and perhaps continue to serve the developer. They ignore the obvious conflicts of interest, as the board of directors and its experts will need to negotiate and settle claims with the developer and others over matters such as construction defects and financial irregularities. These settlements typically include general releases from any future claims and liabilities, so their potential ramifications are immense.

It is therefore absolutely essential for independent attorneys, engineers and financial professionals to be retained by the new owner-controlled boards to help avoid settling claims for only fractions of their real worth. However, by continuing on with the developer’s attorneys, accountants and other professionals as well as its appointed board members, all of whom with obvious conflicting interests, many new community associations set themselves and their unit owners very far behind. They wind up missing out on claims that become time-barred or are legally released under extremely poor settlements by allowing the interests of the developer to improperly influence their negotiations.

The newly elected directors have a fiduciary duty to select extremely well qualified engineers, attorneys and financial professionals with no ties whatsoever with the developer or contractor. They should also bear in mind that the longer an association holds off on addressing construction and financial issues, the easier it becomes for the developer to attempt to shield itself from liability by disposing assets, shifting blame, and alleging intervening causes such as a lack of proper maintenance.

The new board should also review all the vendor contracts that the developer has executed for landscaping, valet parking, security, and other services to determine whether they were arms-length transactions with fair and highly competitive terms and provisions. . .

Considering everything that is at stake during the turnover process and its immediate aftermath, Gary notes that those who become involved at this stage will have the ability to make a very lasting and consequential impact on protecting their investment and ensuring all developer/contractor obligations are upheld.  He predicts they will enjoy the peace of mind that comes with the knowledge that they did everything they could when it was needed most to set their community on a course for success.

Our firm salutes Gary for sharing his insights into this vital matter for associations under newly minted ownership control with the readers of the Miami Herald.  Click here to read the complete article in the newspaper’s website.