When the editors of the Miami Herald decided they would like to feature a new column to provide timely legal knowledge on real estate topics for the readers of its Neighbors community news section that appears on Sundays, they turned to the attorneys of Siegfried Rivera as the exclusive contributors for the newspaper’s new Real Estate Counselor.  The inaugural edition of the new monthly column authored by the firm’s Gary M. Mars appears in today’s edition and as is titled “All Eyes on Florida Legislature for High-Rise Condo Safety Reforms.”  It focuses on the status of reforms after the horrific tragedy of the Champlain Towers South collapse.  Gary’s article reads:

. . . So far, the most significant changes have come at the federal level from Fannie Mae and Freddie Mac, two government-sponsored companies that acquire residential loans to offer mortgage-backed securities for investors in the secondary market. They both have a massive influence over the terms for mortgages offered by lenders, and they recently released new requirements for loans for residences in high-rise buildings with five or more attached units to meet their standards for acquisition. The changes, which are now being adopted and implemented by major residential lenders, place a heavy focus on structural and financial stability, and they reinforce the importance of meticulous documentation of all appraisals, meeting minutes, financial statements, engineering reports, inspection reports and reserve studies. 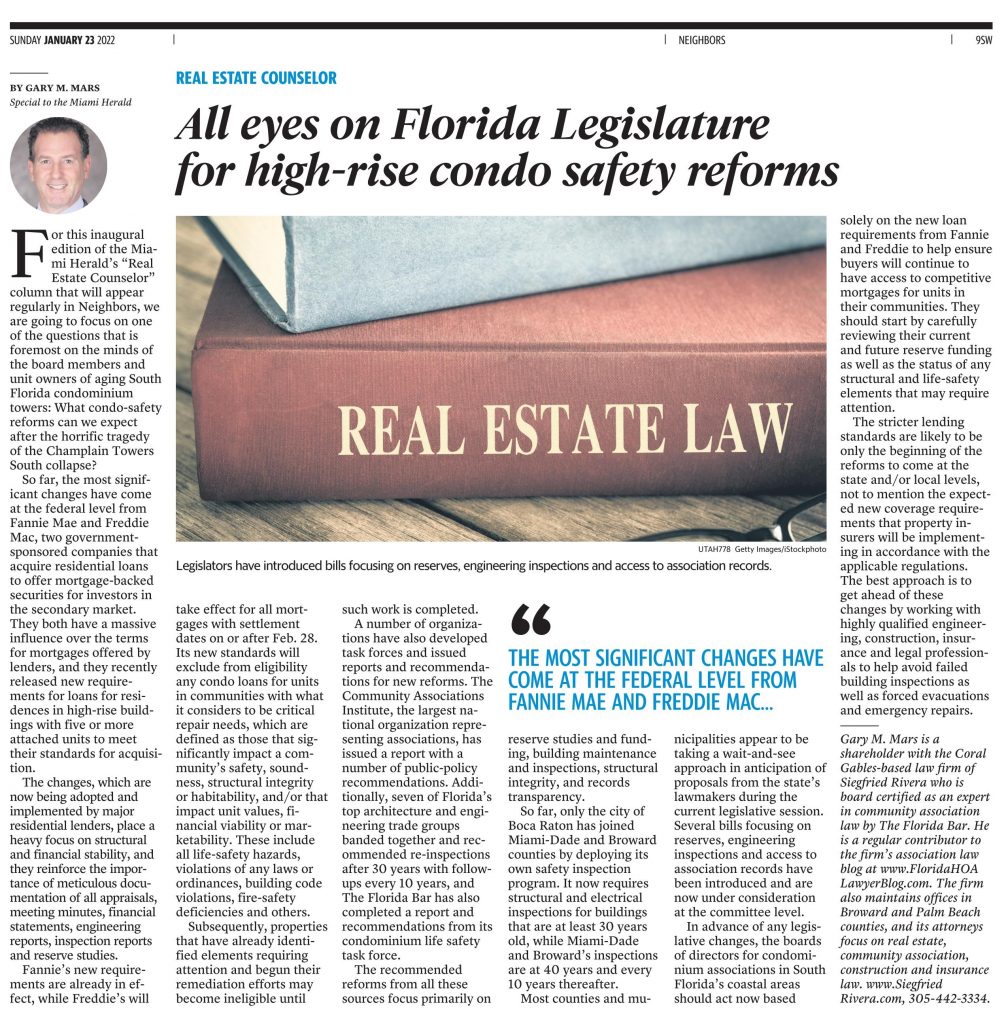 Fannie’s new requirements are already in effect, while Freddie’s will take effect for all mortgages with settlement dates on or after Feb. 28. Its new standards will exclude from eligibility any condo loans for units in communities with what it considers to be critical repair needs, which are defined as those that significantly impact a community’s safety, soundness, structural integrity or habitability, and/or that impact unit values, financial viability or marketability. These include all life-safety hazards, violations of any laws or ordinances, building code violations, fire-safety deficiencies and others.

Subsequently, properties that have already identified elements requiring attention and begun their remediation efforts may become ineligible until such work is completed.

The recommended reforms from all these sources focus primarily on reserve studies and funding, building maintenance and inspections, structural integrity, and records transparency.

Most counties and municipalities appear to be taking a wait-and-see approach in anticipation of proposals from the state’s lawmakers during the current legislative session. Several bills focusing on reserves, engineering inspections and access to association records have been introduced and are now under consideration at the committee level.

In advance of any legislative changes, the boards of directors for condominium associations in South Florida’s coastal areas should act now based solely on the new loan requirements from Fannie and Freddie to help ensure buyers will continue to have access to competitive mortgages for units in their communities. They should start by carefully reviewing their current and future reserve funding as well as the status of any structural and life-safety elements that may require attention. . .

Gary concludes his article by noting that the stricter lending standards are likely to be only the beginning of the reforms to come at the state and/or local levels.  He also anticipates new coverage requirements from property insurers, and he advises that the best approach is to get ahead of these changes by working with highly qualified engineering, construction, insurance and legal professionals to help avoid failed building inspections as well as forced evacuations and emergency repairs.

Our firm salutes Gary for sharing his insights into this status of condominium safety reforms with the readers of the Miami Herald.  Click here to read the complete article in the newspaper’s website.