According to a report by BocaNewsNow.com, four children were riding a 2014 EZ Go “Freedom” Golf Cart on the community’s main street when the unlicensed 15-year-old girl driving the cart darted in front of an oncoming car.  The car, which was driven by Sunny Isles resident Eduard Hiutin, crashed into the golf cart, causing its driver and passengers, ages 11, 13, 14 and 15, to be ejected onto the street.  The children were transported by ambulance to the trauma unit at Delray Medical Center, where one was treated for a catastrophic injury.

The golf cart driver, who lives in the community along with two of the other children, was charged with operating a motor vehicle in a careless or negligent manner as well as failure to yield to the right of way. 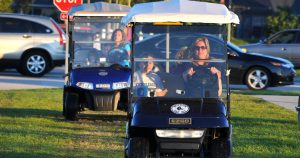 While the parent of the golf cart driver can be sued for negligence in such a case, the association can also be named as a defendant.  In fact, according to the Seven Bridges community’s governing documents filed with the clerk of courts, Seven Bridges requires a golf cart driver to be at least 16 years old and carry a valid driver’s license.  If enforcement of this rule was lax, potential liability could be alleged.

Typically, insurance companies and lawyers representing the injured in any golf cart crash will investigate every aspect of the incident.  They will look into the association’s actions and warnings to enforce its rules involving underage cart drivers, and whether any notices had previously been sent to either the driver or their parents.  They will also explore the actions of the parent/owner of the vehicle.

Florida law states that golf cart drivers may be as young as 14, so long as the cart is being driven in a private community that is registered with the Florida Department of Transportation as a “Golf Cart” community.  Essentially, this enables gated communities to set and enforce their own rules regarding the minimum age and driver’s license requirements for cart drivers.

For communities such as the one in this case in which golf carts are prevalent, associations must develop and enforce their own rules and restrictions for age and license requirements for drivers, and security must monitor and stop all offenders in order to provide effective enforcement.  Otherwise, the community risks potentially significant exposure and legal liability in the event there is an accident involving an underage golf cart driver.