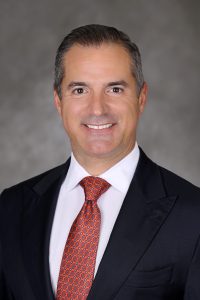 The firm’s latest Miami Herald “Real Estate Counselor” column was authored by partner Roberto C. Blanch and appears in today’s edition of the newspaper.  The article, which is titled “HOA Policies on Signs, Flags Require Diligent Discussion and Deliberation,” focuses on the issues surrounding yard signs and flags in HOA communities that often arise prior to presidential and midterm elections.  Roberto’s article reads:

. . . Many community associations have already established rules covering yard signs, flags and displays, as they have been a long-time cause of questions and concerns in gated enclaves. Even the Florida legislature weighed in on the matter years ago by enacting a state law prohibiting HOAs from banning respectful displays of the U.S. flag as well as the state flag and those of the branches of the armed services.

For community associations that have not yet addressed policies regarding yard signs and displays, taking a proactive approach may well be the most effective option for such a significant and recurring issue. Enacting policies could help to minimize the potential for discord that may arise if neighbors with opposing viewpoints try to outdo each other with walls of signs at their property lines. Not only would such displays be unsightly; they could also significantly compromise harmony within the community and the adherence to mutual respect among fellow owners/residents. 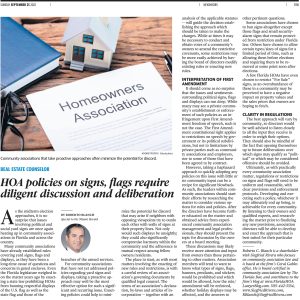 The place to start, as with most matters involving the enacting of new rules and restrictions, is with a careful review of an association’s governing documents by qualified legal counsel. The terms of an association’s declaration, by-laws and articles of incorporation — together with an analysis of the applicable statutes — will guide the decision establishing the approach which should be taken to make the changes. While at times it may be necessary to conduct and obtain votes of a community’s owners to amend the restrictive covenants, some restrictions may be more easily achieved by having the board of directors modify existing rules or enacting new rules.

It should come as no surprise that the issues and sentiments surrounding political signs, flags and displays can run deep. While many may see a private community’s establishment or enforcement of such policies as an infringement upon First Amendment freedom of speech, such is not the case. The First Amendment constitutional right applies to restrictions on speech by government or its political subdivisions, but not to limitations by private parties such as community associations and employers, nor to some of those that have been agreed to by contract.

However, taking a haphazard approach to quickly adopting any policies on this issue with little or no community input can be a recipe for significant blowback. As such, the leaders within community associations should start their efforts by researching the matter to consider various options for rules and policies. After the directors have become further educated on the matter and obtained advice from experienced community association management and legal professionals, they should present the topic for discussion by the owners at a board meeting.

These discussions may likely receive more attention and input from owners than those pertaining to other matters. Association members will tend to want to know what types of signs, flags, banners, pendants, and stickers would be prohibited and which would be allowed, how the rule/amendment will be enforced, whether holiday displays may be affected, and the answers to other pertinent questions.

Some associations have chosen to ban signs altogether except those flags and small security-alarm signs that remain protected from restriction under Florida law. Others have chosen to allow certain types/sizes of signs for a limited period of time, such as allowing them before elections and requiring them to be removed at some point soon after elections.

A few Florida HOAs have even chosen to restrict “For Sale” signs, as an overabundance of these in a community may be perceived to have a negative impact on property values and the sales prices that owners are hoping to fetch.

The best approach will vary by community, so directors would be well advised to listen closely to all the input they receive in order to weigh their options. They should also be mindful of the fact that opening themselves up to future deliberations over which signs may qualify as “political” or which may be considered offensive should be avoided. . .

Roberto concludes his article by noting that ultimately, HOA regulations or restrictions on signs and flags will need to be uniform and reasonable, with clear provisions and enforcement protocols.  He writes that developing and executing such a policy, whichever it may ultimately end up being, is achievable for boards of directors by listening to their owners and qualified experts, and researching the matter prior to finalizing any new provisions.

Our firm salutes Roberto for sharing his insights into this significant and recurring concern for HOA communities.  Click here to read the complete article in the newspaper’s website.