Yet another case of theft and fraud inflicted on an association by an HOA president made local South Florida headlines recently. According to news reports, Michelle Changar-Coe, a former homeowners association president, has been arrested and stands accused of embezzling more than $180,000 from her Tamarac community. Police reports indicate that she forged dozens of checks totaling $181,441.85 which were deposited into her bank account. The authorities reported that the fraud and theft occurred at the Mainlands Section 7 homeowners association from January 2009 through December 2013. Changar-Coe, 44, forged the signatures of four persons without their consent between May 2011 and October 2013. While conducting an audit of financial records, a board member found several checks from community funds that appeared to be forged with his signature and reported it to police. He later found a check for $20,475 that he never recalled signing and had been made payable to a “Michel Chandar,” a name that was later found to be bogus.

Changar-Coe (pictured below) is being accused of creating a fraudulent agreement for the association to pay a “city liaison” $2,575 per month for representation at City Hall. However, “no such position existed with the city of Tamarac, according to two city officials who provided sworn statements,” reads the police report. 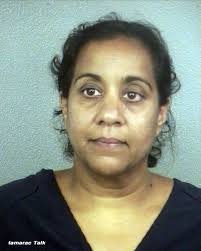 She continued to invoice and collect from the association for the fake job from May 2011 to November 2013 using the name of Michelle Charger. Investigators found checks deposited into Changar-Coe’s personal bank account bearing the supposed city liaison’s name. She has been charged with first-degree grand theft of more than $100,000 and four counts of fraud.

An article by Tamarac Talk (www.tamaractalk.com) further details how the fraud was finally uncovered, detailing that “[r]resident Steve Soloff was suspicious, and informed the board that he had visited the City of Tamarac and spoke with City Clerk Pat Teufel” who had informed him “. . . that in her 10-year tenure with the city, she has never heard of any agreement by a homeowners association to hire a city liaison . . . ” and that “. . . she knew of no person named Michelle A. Charger.”

Apparently, key details of the fraud were uncovered as a result of a former director’s investigation of discrepancies uncovered in connection with the association’s finances in early 2012, when a fraudulent court document was presented demanding that such director and another director both resign immediately or face a $1 million lawsuit.

The above account underscores the importance for association directors and managers to implement procedures and policies aimed to avoid the victimization of the association and its members. These efforts may include requiring that at least two board members sign all checks, the requirement for background checks and screenings for managers and employees, the thorough review of all bank statements and financial records presented to directors and managers, the establishment of low limits on discretionary expense approvals without board authorization by the property manager, and a detailed review and understanding by directors of the association’s yearly financial audits performed by independent professionals.

Additionally, the foregoing story also highlights the relevance of what a thorough review of association records may reveal following a detailed inspection of official records by or on behalf of owners having reasonable suspicions of wrongful activity by directors or other association representatives. Lastly, this story suggests that in the event that directors have doubts or questions regarding suspicious activities or documents presented to the association, then such concerns should be promptly reported to association counsel for evaluation.

Our firm’s other HOA and condominium association attorneys and I work very closely with our clients to help them to avoid and detect theft and fraud in their communities. We write in this blog about important legal and administrative issues affecting associations in Florida, and we encourage association directors, members and property managers to enter their email address in the subscription box at the top right of the blog in order to automatically receive all of our future articles.