The firm’s Roberto Blanch was the first independent expert source quoted in a report in today’s Miami Herald on a new bill filed yesterday during Florida’s legislative special session on home insurance that appears to be on track to be the most significant overhaul of the state’s condominium laws in decades. It was passed by the full Senate yesterday and is poised to be approved by the House today.

The proposed measures, which are in direct response to the horrific Champlain Towers tragedy that claimed 98 lives, include statewide inspections for aging condominium buildings and requirements for condo associations to hold money in reserves to pay for repairs. The bill also requires developers of new buildings to fund reserves, and it imposes legal liabilities on board members who ignore inspection requirements.

The Miami Herald article, which appears under the headline “Legislature Reaches Deal on Condos,” reads:

. . . [The bill] would require condominium associations to conduct reserve studies every decade to make sure they have the resources to finance needed structural repairs. 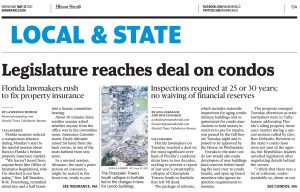 Starting in 2025, they would be barred from waiving a requirement that they put money in reserves to make structural repairs, although they could continue to waive collecting reserve funds for other improvements.

There are hundreds of condo buildings in South Florida and more across the state that would need to ramp up funding quickly if the bill passes, said Roberto Blanch, a Miami-based condo attorney for Siegfried Rivera.

“That is very likely going to impart upon [condo associations] a heavy financial burden,” Blanch said. “It’s kind of like quitting smoking cold turkey. There’s not going to be any gradual step-down for these folks. That could, in some buildings, become a very tough pill to swallow.”

. . . The bill would also require that condos be re-certified after 30 years if they are three stories or higher, or are 25 years old and within three miles of the coast. Every 10 years after that, they would have to be re-certified again.

The statewide inspection requirement is necessary to ensure that “buildings are structurally sound so as to not pose a threat to the public health, safety or welfare,” the bill says.

But under current law, only Miami-Dade and Broward counties and some individual cities require regular inspections of condos to ascertain their structural integrity. The proposed legislation would change that.

Our firm salutes Roberto for sharing his insights with the Miami Herald‘s journalists on the ramifications of this major new legislation on the day in which it was introduced.  Click here to read the complete article in the newspaper’s website.