Maintaining the common elements and areas is one of the primary functions and responsibilities of community associations.  Last year’s ruling by the Seventh Judicial Circuit Court’s Appellate Division illustrates the potential consequences that may arise in the event an association does not adequately address complaints by unit owners regarding nuisances resulting from the improper maintenance of the common elements.

In the case of Harbor View Daytona Condominium Association v. Katherine Strachan and John F. Strachan, the Strachans had complained to the association for several years of drainage back-flow plumbing problems causing black, soapy water to back up into the toilets, showers and sinks of their first-floor unit.

One of the plumbers who performed work at the condominium building during its original construction testified in depositions that when Harbor View converted from rental apartments to a condominium, washing machines were added to the individual units.  While most of these washing machines connect to a drainpipe dedicated exclusively to them, the washing machines on the eighth floor penthouse level drain into pipes to which kitchen sinks from lower units are also connected. 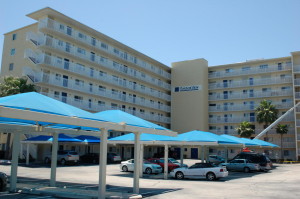 The plumber recommended that the association should either hire a mechanical engineer to evaluate the problem and make recommendations, re-pipe unit 808’s washing machine drainpipe and run it where it would tie into the sewer line, or install a laundry tub in unit 808 and have the washing machine drain into the laundry tub to slow down the water enough to prevent the backflow of water into unit 111.

The association had taken no apparent action to resolve the problem.  The lower court entered an order granting summary judgment against the association, finding that the drainage problem constituted a nuisance that it had a duty to abate under Florida law and the community’s own declaration, further ordering the association “to diligently and permanently abate the plumbing nuisance harming Unit 111.”

The lower court’s ruling was affirmed by the appellate panel, which concluded that the association failed to commit itself to finding a solution to the backups by following the plumber’s recommendations, and the Strachans had demonstrated the existence of a problem, the responsibility of the association to maintain the kitchen sink line, and the continuation of the backups over a period of years.