The firm’s Michael L. Hyman authored an article that appeared as the “Board of Contributors” guest commentary column in today’s edition of the Daily Business Review, South Florida’s exclusive business daily and official court newspaper.  The article, which is titled “$7.5M Verdict Against Condo Association Should Have Been Prevented,” discusses the multi-million dollar verdict in a case involving a hot tub accident at a St. Petersburg, Florida, condominium and the potential ramifications that can result when any defects in community amenities are not properly addressed.  Michael’s article reads:

In 2008, Ehab Mina was about to step into the hot tub at the Boca Ciega Resort & Marina Condominium when he became startled to see that it was partially drained. The problem in the hot tub caused the 44-year-old to slip, and he badly injured his right shoulder and spine.

Mina required multiple surgeries, and he was ultimately forced to sell his boat-building business as a result of his injuries. He filed suit against the association and its property management company, Condos by Sirata Inc., alleging that the hot tub should have had a posted warning and adequate lighting in the evening hours. 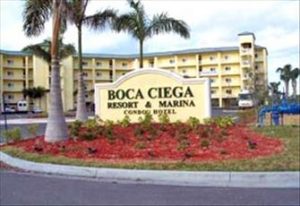 The attorneys for the condominium association responded by arguing that the half-empty hot tub was an obvious condition, but the jury found the association and its management company to be jointly liable.  It awarded a $7.56 million verdict to Mina.