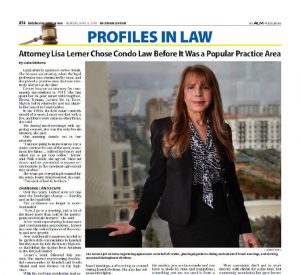 The firm’s Lisa A. Lerner was the subject of a profile article in today’s edition of the Daily Business Review, South Florida’s exclusive business daily and official court newspaper.  The article, which is titled “Attorney Lisa Lerner Chose Condo Law Before it Was a Popular Practice Area,” chronicles Lisa’s 36-year career as one of the pioneer female South Florida attorneys in community association law.  It reads:

Lisa Lerner is a pioneer on two fronts. She became an attorney when the legal profession was dominated by men, and she picked a practice area that was relatively obscure at the time.

Lerner became an attorney for community associations in 1983. She has spent her 36-year career with Siegfried Rivera, where she now is a shareholder based in Coral Gables.

In the 1980s, the field wasn’t entirely devoid of women. Lerner worked with a few, and there were some in other firms, she said.

But during most meetings with opposing counsel, she was the only female attorney, she said.

One meeting stands out in her memory.

“I am not going to name names, but a senior partner for one of the most prominent law firms … call(ed) me honey and asked me to get him coffee,” Lerner said. With a smile, she agreed, “then sat down, and we proceeded to expose every loophole in the easement agreement they drafted.”

Her team got everything it wanted for the condo board it represented, she said.

“You kind of had to be there.”