The firm’s latest Miami Herald “Real Estate Counselor” column authored by Gary M. Mars featured in today’s Neighbors section is titled “Possible $8M Fraud Against Florida Community Associations is a Wake-Up Call.”  The article, which is the second of two parts, is on a developing case from Southwest Florida that appears to be one of the largest incidents of fraud and embezzlement ever inflicted on community associations in the state.  It reads:

. . . An excellent Naples Daily News/The News-Press investigation has found that the associations are reporting more than $8 million has been taken from their accounts. Association directors have told the journalists that APMS took sole control of their Wells Fargo Bank accounts by telling them to sign new signature cards but then never submitting them to the bank.

The ordeal that these communities are now undergoing is horrific, and many of us who provide essential services for associations in Florida have been impacted by this case. We shake our heads in disgust at the brazen actions that appear to have taken place, while also hoping that we have successfully helped every association we work with to avoid the potential for any such malfeasance. 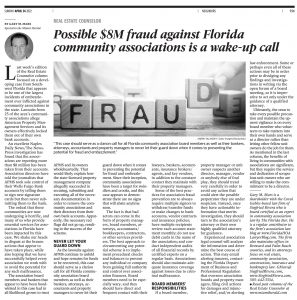 The association board members and bankers that appear to have been hoodwinked in this case had in all likelihood grown to trust APMS and its owners wholeheartedly. That would likely explain how the state-licensed property management company allegedly succeeded in securing, submitting and executing all of the necessary documentation in order to remove the community associations and their directors from their own bank accounts. Apparently, the necessary red flags did not go up, resulting in the success of the scheme.

END_OF_DOCUMENT_TOKEN_TO_BE_REPLACED

The firm’s latest Miami Herald “Real Estate Counselor” column authored by Gary M. Mars appears in today’s “Neighbors” section under the headline “Southwest Florida Community Associations Appear to Fall Victim to Massive Fraud.”  The article focuses on what appears to be one of the largest cases of fraud and embezzlement ever committed against Florida community associations that is now unfolding in Southwest Florida.  Gary’s article reads:

. . . Association directors, and also to some extent the property managers they retain, have control over communities’ purse strings, and for some enclaves we are talking about multiple millions of dollars per year. Such amounts under the control of so few have made condominiums and HOAs a favorite target of crooks and fraudsters for generations. Swindlers have embezzled millions of dollars from communities, before getting caught and facing the music in the vast majority of cases.

An excellent Naples Daily News/The News-Press investigation that remains ongoing appears to reveal sadly yet another example of the type of rampant fraud that can be inflicted on communities.

The case stems from an initial lawsuit filed by the Compass Point South at Windstar condominium association in Naples last April against American Property Management Services, owner Orlando Miserandino Ortiz, and his wife and co-owner Lina Munoz Posada. It alleges that the association and its board members lost access to their Wells Fargo Bank accounts because APMS did not add their names to the accounts, effectively locking them out.

The case was expanded in January with a new lawsuit listing 24 additional plaintiffs and new allegations, including that there is good cause to believe that the owners have left the U.S. and have been residing in Colombia for more than a year. Both complaints allege Miserandino placed funds in accounts that only he could access, preventing the associations from keeping tabs on or accessing their money. According to interviews by the journalists with the association directors, APMS took sole control of their accounts by telling them to sign signature cards but then never submitting them to the bank.