The reports, which aired in recent newscasts in the Tampa Bay area by WFLA and WTSP, chronicle daily sightings and incidents of packs of wild pigs at the River Club community and surrounding neighborhoods (see photo from homeowner below).

Community resident Phil Pape says that in October and November the problem became seriously out of control. He and several of his neighbors tell the stations’ reporters that the wild pigs are wreaking tens of thousands of dollars in damage to their properties. The hogs tear up lawns and landscaping in search of food underneath the turf, replacing pristine lawns with a muddy mess.

“My neighbor next door, three-quarters of her property is all torn up,” states Pape, who notes that the hogs had been eating acorns in another neighbor’s property and he’s seen packs of as many as 30. 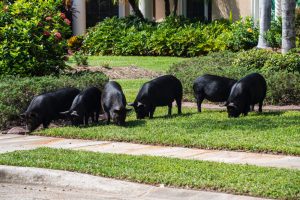 Homeowner Bob Lapp notes that he and other homeowners have been racking up damages around their homes, but they don’t want to fix everything until they know it won’t happen again. “The hard part is the fact that you could spend $1,000 today and wake up tomorrow morning and it would be all over again,” agrees Pape.