Just two days after his insights were featured in the Miami Herald‘s initial article on the Florida legislature’s proposed new condominium-safety reforms, Roberto Blanch‘s input on the changes that unanimously passed in both the House and Senate on the state’s condominium associations and owners were prominently featured in the newspaper’s follow up report on today’s front page.  The article, which is headlined “‘A Major Move Forward in Safety.’ A Look at How Condo Reforms Will Work,” focuses on the new requirements for condominiums to conduct regular building inspections and build sufficient cash reserves to cover structural maintenance and repairs.  The article reads:

. . . The changes are laid out in a set of amendments to Florida’s condo law approved by the state House and Senate on Tuesday and Wednesday. In a surprise, the Legislature acted swiftly this week during a special session designed to address the home-insurance crisis after coming under substantial public pressure for doing nothing to shore up condo inspections and regulations  following the Surfside tragedy, which claimed 98 lives. 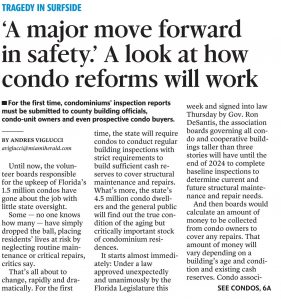 The reform law generally hews to detailed findings and recommendations issued after Surfside by public-interest groups that include the Florida Bar, the Miami-Dade County Grand Jury, a consortium of Florida professional engineer associations, and the Community Associations Institute, a national organization that represents thousands of associations, managers and residents.

The reforms had broad but not uniform support from principal sectors of the condo industry, including association representatives, condo lawyers and real estate brokers.  Together, backers say, the reforms should markedly boost confidence in the safety of  Florida’s condos.

The new rules give added authority to condo boards that might have been reluctant to raise fees and assessments for repairs because unit owners objected to paying more money. New disclosure regulations mean boards can no longer hide bad news on the condition of condo buildings. . .

. . . The enormity of the undertaking does give some supporters of condo reform pause.

It’s not clear whether the limited pool of licensed Florida engineers and architects who do condo inspections can cope with the expected surge in demand for their services, said Roberto Blanch, an expert on association law at Siegfried Rivera in Coral Gables. Many engineers and architects already avoid condo work for fear of lawsuits, a concern exacerbated by the staggering $1 billion settlement for the Champlain Towers disaster, Blanch said.

It’s also unclear how the reforms will affect county building departments that might be faced with substantial workload increases as condo associations apply for permits for repairs as a result of the mandated inspections, he said.

“Something had to be done, and this is a step in the right direction,” Blanch said.  “Let’s see how it works. Once we start getting into the real world and putting this all into place, I think we’re going to experience some growing pains. We shall have to see, from the condo boards’ perspective to the engineers and to the building departments, how all these ingredients blend together.”. . .

Once again, our firm salutes Roberto for sharing his insights on this monumentally important new condo-safety legislation with the readers of the Miami Herald.  Click here to read the complete article in the newspaper’s website.