The firm’s latest Miami Herald “Real Estate Counselor” column is authored by shareholder Michael L. Hyman and appears in today’s edition of the newspaper.  The article, which is titled “3 Reports of Association Fraud on Same Day Show Importance of Prevention, Vigilance,” focuses on news reports from across the country that made headlines on Sept. 26 of three cases of apparent community association fraud, theft and embezzlement.  It reads:

. . . The reports began in Minneapolis when several local outlets as well as the Associated Press chronicled how a California woman had been indicted in federal court for embezzling more than $1 million from several local HOAs. Mai Houa Xiong, 47, of Fresno, California, was charged with wire fraud, aggravated identity theft, making and subscribing a false return, and other charges.

Xiong, who worked for an unnamed Minneapolis property management company from May 2013 – Oct. 2021, “had nearly unfettered access to the victim homeowner’s associations’ financials, bank accounts, vendor and contractor payments, and bookkeeping systems,” according to a U.S. Attorney’s Office news release. 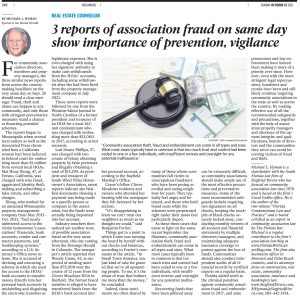 She is accused of devising and executing a scheme in which she used her access to the HOAs’ bank accounts to transfer money directly into her personal bank accounts by mislabeling and disguising the electronic transfers as legitimate expenses. She is even charged with using her signatory authority to make cash withdrawals from the HOAs’ accounts, including some withdrawals after she had been fired from the property management company in July 2021.