The use of drones by owners and residents of units in HOA and condominium communities has created concerns across the country over potential privacy and safety issues for community association managers and their boards of directors.  Sales of drones to consumers in the U.S. are expected to grow from 2.5 million in 2016 to 7 million in 2020, according to a report from the FAA.  As the popularity of drones continues to soar, associations will need to come to terms with how they wish to address their use within their communities.

At the FishHawk Ranch community in the Tampa area, the use of drones by a homeowner has created such an uproar that it drew the attention of local TV news.  The area’s CBS affiliate recently chronicled the battle that is brewing in the community over homeowner Frank Bragg and his collection of a half-dozen drones.

Bragg demonstrated his drones and the images that they capture to the station’s reporter, but the HOA president says those images are proof of the problem.  He says that Bragg has been flying the drones over the community pool, and there have been Facebook posts raising privacy concerns and calling the homeowner out for “hovering over the kids’ area with half-naked children.”

Bragg contends he was practicing flying the drone while his daughter played in the pool, and he notes that drones are not restricted by the current HOA rules. 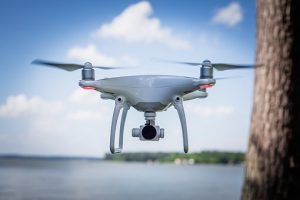 Police were called once when Bragg was told to stop flying the drones and refused to comply, but they did not take any action because he had left before they arrived. The latest move from the HOA was to revoke Bragg’s privileges to use the community’s amenities.

When the news of the TV report went out, several neighbors contacted the station to indicate that the violations of their privacy with Bragg’s drones go well beyond the community pool.  They claim that the drones also hover very low over their yards and that he uses them to look into their garages from their driveways.

The HOA will be addressing the drones at its next board meeting, with both Bragg and his critics planning to attend what will surely a contentious gathering.

Florida community associations should consider getting ahead of the issues created by drones by establishing clear parameters for their use within common elements and common areas.  Last year, the Federal Aviation Administration enacted new regulations for the use of drones.  Recreational users must register their drones and label them with the registration number, they must only be flown below 400 feet and always within sight of the operator, and they are banned from use near other aircraft and airports as well as over groups of people, stadiums, sporting events, or emergency response efforts.

Privacy concerns over the use of drones with cameras were addressed by a new Florida law stipulating that drones with cameras may not be used to record images of privately owned properties or of the owners, tenants or occupants of properties in violation of their reasonable expectations of privacy without their written consent.  Reasonable expectations of privacy are presumed if individuals are not observable by others located at ground level in a place where they have a legal right to be, regardless of whether they are observable from the air with the use of a drone.

The implementation of new association rules governing drones should begin with a discussion that is open to all of the unit owners at a board meeting.  If an association concludes that it wishes to permit the operation of drones in the community, it should consider rules to help ensure safety such as the establishment of designated take-off/landing sites, restricting their use to daylight hours, developing penalties for violations, and clarifying that the association is not liable for any property damage that they may cause.

With the continued growth in recreational drones, now is the time for associations to work together with their members to create rules that will address the related safety and privacy issues.   Click here to watch the report in the station’s website.